RES is responsible for the four turbine wind farm at Woolley Hill, between the villages of Woolley and Ellington in Huntingdonshire (location maps can be found here).

Work on site began in March 2014 with turbine deliveries taking place in the autumn. All four Nordex turbines were erected by the end of November and each stands 130.5 metres high to the tip of the blade.

Woolley Hill Wind Farm has an installed capacity of 10MW, which is enough renewable electricity to meet the average needs of more than 8,000 UK homes*.

* The homes equivalent has been calculated by taking the predicted annual electricity generation of the site (according to RES studies the Woolley Hill site has a capacity factor of 39.1%) and dividing this by the annual average electricity consumption figure of 4128kWh from DECC (Department of Energy and Climate Change). 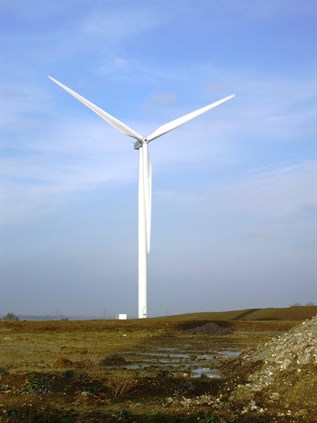 One of the four Nordex turbines installed at Woolley Hill Wind Farm.